Hi It only takes a minute to copy and send this message to the appropriate people and to forward to others.

I demand that 'The Infant Feeding Maze' talk scheduled for June 12, 2008 in Burnaby, BC Canada be cancelled as it violates Article 7.3 of the WHO Code.

We need your help to stop Nestle's plans to give a wine and dine infant feeding talk (June 12, 2008) to health professionals in B.C. As you know, we stopped the formula companies from doing this more than 10 years ago but Nestle is now in B.C. and is trying to do it again. We have a 95% breastfeeding rate in B.C. because we work hard to protect breastfeeding from the commercial pressures to artificially feed.Attached is Nestle's invitation. We are asking that concerned people throughout B.C., Canada and internationally email Nestle to let them know we will not put up with marketing that violates the WHO Code.

Please email Oweenie Lee (email address on the invitation) requesting (?demanding) that this talk be cancelled as it violates Article 7.3 of the Code. Emails can be short as Nestle already know they are not allowed to do this. If you have a problem getting through to Oweenie, you can send your email to Catherine.OBrien@ca.Nestle .

Catherine works for Corporate Affairs, Nestle. Please send me a copy of your letter so I can measure the momentum. (Renee Hefti renhefti@telus.net )

Your emails will be forwarded to the B.C. Minister of Health as the B.C. Government has endorsed the Code, and so has the Health Authority where the talk is scheduled.

If the talk is not cancelled, we will notify the public and demonstrate on site on June 12, 2008.

Your email can help to make a difference - email me if you have more questions. 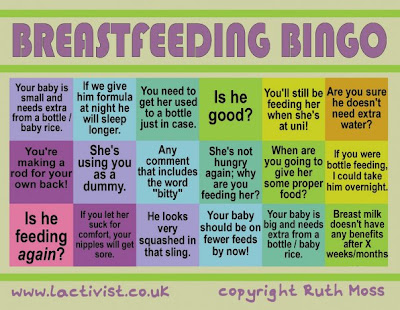 Which ones of these comments have you heard in your nursing experiences?

First of all, I would like to send my thoughts and prayers to all the families that were affected by this terrible disaster. No-one should ever have to go through anything of that degree. Very sad and heartbreaking.

JIANGYOU, China (CNN) -- A Chinese police officer is being hailed as a hero after taking it upon herself to breast-feed several infants who were separated from their mothers or orphaned by China's devastating earthquake.

Officer Jiang Xiaojuan, 29, the mother of a 6-month-old boy, responded to the call of duty and the instincts of motherhood when the magnitude-7.9 quake struck on May 12.

"I am breast-feeding, so I can feed babies. I didn't think of it much," she said. "It is a mother's reaction and a basic duty as a police officer to help."

The death toll in the earthquake jumped Thursday to more than 51,000, and more than 29,000 are missing, according to government figures. Thousands of children have been orphaned; many others have mothers who simply can't feed them.
At one point, Jiang was feeding nine babies.

"Some of the moms were injured; their fathers were dead ... five of them were orphans. They've gone away to an orphanage now," she said.

She still feeds two babies, including Zhao Lyuyang, son of a woman who survived the quake but whose breast milk stopped flowing because of the traumatic conditions.

"We walked out of the mountains for a long time. I hadn't eaten in days when I got here, and my milk was not enough," said that mother, Zhao Zong Jun. "She saved my baby. I thank her so much. I can't express how I feel."

Liu Rong, another mother whose breast milk stopped in the trauma, was awed by Jiang's kindness.

"I am so touched because she has her own baby, but she fed the disaster babies first," Liu said. "If she hadn't fed my son, he wouldn't have had enough to eat."
Jiang has became a celebrity, followed by local media and proclaimed on a newspaper front page as "China's Mother No. 1

She's embarrassed by the fuss.

"I think what I did was normal," she said. "In a quake zone, many people do things for others. This was a small thing, not worth mentioning."

There has been a huge outpouring of support from families who want to adopt babies orphaned by the quake. But that process takes time, and there are mouths to feed.

Jiang misses her own son, who's being cared for through the emergency by in-laws in another town, but she is aware of the new connections she's made.
"I feel about these kids I fed just like my own. I have a special feeling for them. They are babies in a disaster."
Posted by JQ at 11:51 AM 1 comment: 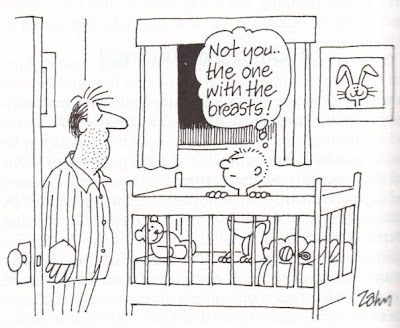 http://www.motherchronicle.com/watchyourlanguage
Posted by JQ at 9:35 PM No comments: