Human milk is produced and delivered to the consumer without any pollution, unnecessary packaging or waste. Most of the focus on the environmental effect of newborns is concentrated on the debate between cloth vs. disposable diapers, but the environmental consequences of formula feeding have far greater impact. Large amounts of water, fuel, paper, glass, plastic and rubber are required in the production, shipping and preparation of formula.
Additionally, formula feeding produces significant amounts of solid waste. Substituting cow’s milk for human milk is costly, causes waste and uses valuable resources. For example, each year in the US, over half a million women formula feed their babies from birth. If just these mothers breastfed for a full year (with solids introduced after six months), these valuable resources would be saved:
25 million pounds of steel from formula cans
2.5 million pounds of paper
2.5 million pounds of HDPE from plastic milk containers
27 million gallons of milk, requiring 465 million pounds of dairy feed to produce
6 million gallons of oil for production, transportation and refrigeration
135 million pounds of carbon dioxide produced by the use of those 6 million
gallons of oil, requiring 35,000 acres of forest to absorb


The longer women breastfeed, the lower their risk of heart attacks, strokes and cardiovascular disease, report U.S. researchers in a study in the journal Obstetrics & Gynecology.
The study adds to a growing body of evidence suggesting breastfeeding has health benefits for both mother and baby.


Researchers at the University of Pittsburgh looked at data on nearly 140,000 post-menopausal women enrolled in the Women's Health Initiative, a study of chronic disease that began in 1994.

They found that compared to women who never breastfed, women who breastfed for one to six months in their lifetimes had a:

Women who breastfed two years or more during their lifetimes had a:

An average of 35 years had passed since women enrolled in the study had last breastfed an infant, suggesting that the benefits from breastfeeding last a long time, said lead researcher Dr. Eleanor Bimla Schwarz, assistant professor of medicine, epidemiology, and obstetrics,
"We have known for years that breastfeeding is important for babies' health; we now know that it is important for mothers' health as well," said Schwarz.

"The longer a mother nurses her baby, the better for both of them... Our study provides another good reason for workplace policies to encourage women to breastfeed their infants."


Research has found that breastfeeding offers many health benefits to both mother and baby.

The Breastfeeding Committee for Canada notes that breastfeeding offers protection for some women against breast cancer, ovarian cancer, endometrial cancer, osteoporosis and anemia.


The list of benefits for the baby is long, with breast milk credited with protecting against obesity, childhood cancers, allergies, and ear and stomach infections.

Breast is Best For Both Mom and Baby


Breast is best for both mom and baby

Breast isn't just best for baby: mothers who don't breastfeed their babies may increase their risk of heart attacks and strokes decades later, new research suggests.
The evidence comes from the massive Women's Health Initiative trial and involved nearly 140,000 women. Researchers found women who breastfed were less likely when they were older to have developed high blood pressure, diabetes, high cholesterol and cardiovascular disease, the leading cause of death in Canadian women.
"The longer a woman breastfed her baby, the better it was for both of them," says lead author Dr. Eleanor Bimla Schwarz, of the University of Pittsburgh.
"We know that women who don't breastfeed their babies are at a higher risk of getting breast cancer and ovarian cancer," Schwarz says.
Recent studies show women who don't breastfeed also have higher risks of diabetes and high blood pressure.
"Ours is the first study that shows that there really is a strong effect in terms of preventing heart attacks and stroke for women who nursed for more than six months," says Schwarz, an assistant professor of medicine, epidemiology and obstetrics, gynecology and reproductive sciences.
The study appears in the latest issue of Obstetrics and Gynecology.
Health Canada recommends breast milk should be the only food or drink for the first six months of life, and that breastfeeding continue, along with the gradual introduction of solid food, for two years or more.
But a national survey released last month found only 14 per cent of new moms in Canada were exclusively feeding their newborns breast milk by age six months.
Breastfeeding helps protect babies against infections and disease, benefits that are thought to last a lifetime.
"We now know that it's important for mothers' health as well," Schwarz says.
Her team analyzed data from 139,681 post-menopausal women, average age 63, enrolled in the Women's Health Initiative study, known best for its research on hormone replacement therapy.
Researchers looked at the women's lifetime history of breastfeeding, meaning how many months in total they had breastfed their babies.
Women who breastfed for one to six months had less diabetes, less high blood pressure and less high cholesterol, all known risk factors for heart disease.
Those who breastfed for seven months or more were significantly less likely to have actually developed cardiovascular disease compared to women who had never breastfed.
Women who breastfed for a lifetime total of at least 12 months were 10 per cent less likely to have had a heart attack or stroke or developed heart disease when they were older.
The finding held after researchers took age, income, body mass index, diet, physical activity, family history of heart disease and other factors into account.
For Schwarz, the study was personal. "As a new mom who went back to work, I found pumping a bit challenging," Schwarz says. "Everybody kept telling me it was good for my baby. I wondered what effect it had on my own health."
The study doesn't prove cause and effect, just an association, and there may be other issues at play, cautions Dr. Beth Abramson, a Toronto cardiologist and spokeswoman for the Heart and Stroke Foundation.

© Copyright (c) The Vancouver Sun
Posted by JQ at 1:52 PM No comments:

Breastfeeding Has Twice the Benefits of Bottle-Feeding

Alison Stuebe, M.D.
Written by Margot Carmichael Lester for UNC Health Care
Alison Stuebe, M.D., assistant professor of obstetrics and gynecology at the University of North Carolina at Chapel Hill School of Medicine, is investigating how breast-feeding impacts diabetes, heart disease, stress and metabolism. Stuebe, who works in the Division of Maternal Fetal Medicine, used longitudinal data from the Nurses’ Health Study, one of the largest and longest-running investigations of factors that influence women’s health.
“It’s apparent that nursing may help the mother's metabolism shift out of pregnancy mode faster,” she says. Stuebe’s findings show that breastfeeding can mitigate the effects of these conditions:


Heart Disease: “Women who breast-fed for two years or more had a 23 percent lower risk of heart attack,” Stuebe says. “That’s pretty big when you consider that heart disease is the leading killer of women.” Other studies have found that post-partum women who breastfeed have better cholesterol levels that women who don’t.

Stress: “There is clear evidence that women who breastfeed have a different response to stress than those who bottle-feed,” she says. Oxytocin – a hormone that reduces fear and increases trust – is probably the key since it’s released during breast-feeding.


While the relationships are clear, why they exist is not. “Is it something about the breast-feeding itself, or the something about the mothers who breastfeed?” Stuebe asks. “Is it the lifestyle of nursing mothers or the milk itself? These questions are hard to answer in observational studies. But the protective aspects of breastfeeding are becoming clear.”
Given the benefits, Stuebe has teamed up with the UNC Hospitals’ lactation consultants to launch a breastfeeding clinic to help women begin and continue nursing. The UNC Lactation Clinic is available to mothers whether or not they delivered at UNC Hospitals. Its midwives, lactation consultants and OB/GYNs meet with mothers, develop a plan and follow up as necessary. To make an appointment, women can call the Breastfeeding Warmline at 866-428-5608.
Many mothers, like Anne-Marie Meyer of Carrboro, come to the clinic in pain.
“I was having recurring infections, and before I went to the clinic, I saw three primary care/internal medicine physicians, a midwife, an immunologist, two dermatologists and an OB/GYN,” she recalls. “None of them could help me.”
The Lactation Clinic team not only began investigating the source of Meyers’s symptoms, but also provided pain management, and emotional and lactation support. Stuebe determined that Meyer was suffering from a staph infection that presented in an unusual way. Meyer was given immediate treatment and the infection was eradicated.
“The clinic team really put the big picture together,” Meyer says. “This was the most difficult and excruciating medical experience I’ve had to navigate in my life, but I felt I had the most personal and genuine care at the clinic.”
While Meyer is more than satisfied with her experience at the clinic, Stuebe wants to be able to provide even more comprehensive care. She’s hoping to secure funding for a study on managing breast pain.
“About one-third of women who stop breast-feeding in the first month attribute the decision to pain,” she says. Working with a microbiologist and the UNC lactation consultants, she will try to find out how to appropriately diagnose and treat infection-related pain. That descriptive data would then be used to launch a clinical trial.
“There’s a paucity of good literature on how to manage this kind of thing,” Stuebe laments. “We’re hoping to develop protocols for breast infection and other common issues so the health care community can begin to work in the same way. We want to gather data and come up with evidence-based guidelines for treatment and education that we can disseminate throughout the community.”
Expanding the research base on the benefits and problems of nursing is critical, Steube says. “Breastfeeding affects two generations – mother and baby,” she asserts. “There’s just not as much good science as this topic deserves.”
To learn more about lactation services at UNC, call the Breastfeeding Warmline at 866-428-5608 or visit http://www.med.unc.edu/fammed/for-patients/maternal-childcare/lactcon. For more information on women’s health, visit http://www.nchealthywoman.org.
Media contact: Clinton Colmenares, (919) 966-8757, ccolmena@unch.unc.edu or Tom Hughes, (919) 966-6047, tahughes@unch.unc.edu.
Posted by JQ at 9:54 AM 3 comments: 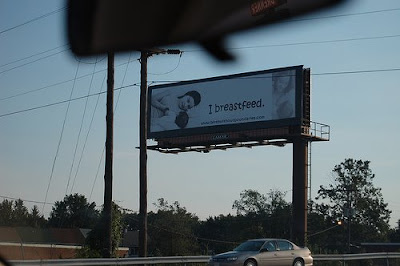 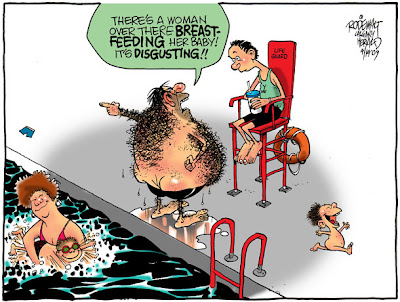 Power of a Mother's Milk! 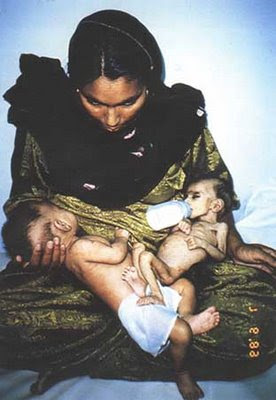 An amazing blog; a must read!

More Pictures from The Mom, Pop and Tot Fair, 2009 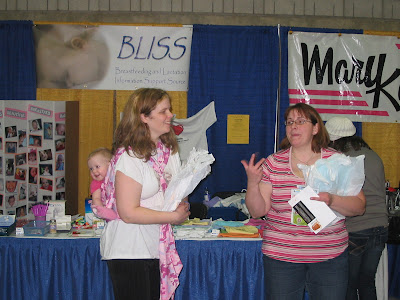 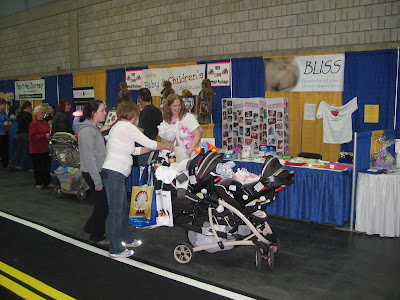 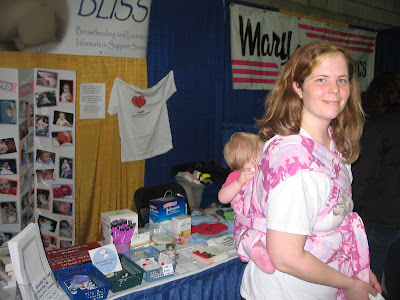 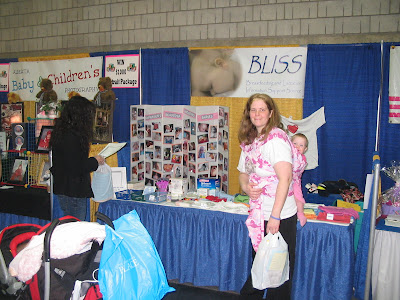 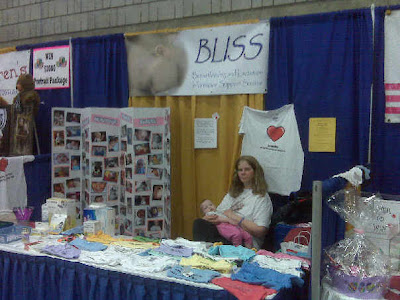