How Breastfeeding Transfers Immunity to Babies

How Breastfeeding Transfers Immunity To Babies

(Oct. 27, 2008) — A BYU-Harvard- Stanford research team hasidentified a molecule that is key to mothers’ ability to pass along immunityto intestinal infections to their babies through breast milk. The study highlights an amazing change that takes place in a mother’s bodywhen she begins producing breast milk.

For years before her pregnancy, cells that produce antibodies against intestinal infections travel around hercirculatory system as if it were a highway and regularly take an “off-ramp”to her intestine. There they stand ready to defend against infections such as cholera or rotavirus. But once she begins lactating, some of these same antibody-producing cells suddenly begin taking a different “off-ramp,” so to speak, that leads to the mammary glands.

That way, when her baby nurses, the antibodies go straight to his intestine and offer protection while he builds up his own immunity. This is why previous studies have shown that formula-fed infants have twice the incidence of diarrheal illness as breast-fed infants. Until now, scientists did not know how the mother’s body signaled the antibody-producing cells to take the different off-ramp. The new study identifies the molecule that gives them the green light.

“Everybody hears that breastfeeding is good for the baby,” said Eric Wilson, the Brigham Young University microbiologist who is the lead author on thestudy. “But why is it good? One of the reasons is that mothers’ milk carries protective antibodies which shield the newborn from infection, and this study demonstrates the molecular mechanisms used by the mother’s body to get these antibody-producing cells where they need to be.”

Understanding the role of the molecule, called CCR10, also has implications for potential future efforts to help mothers better protect their infants. “This tells us that this molecule is extremely important, so if we want to design a vaccine for the mother so she could effectively pass protective antibodies to the child, it would be absolutely essential to induce high levels of CCR10,” said Wilson.

Speaking broadly about the long-term applications of this research, BYU undergraduate Elizabeth Nielsen Low, a co-author on the paper, said, “If we know how these cells migrate, we’ll be able to hit the right targets to ge tthem to go where we want them.” Daniel Campbell is a researcher at the Benroya Research Institute in Seattlea nonprofit organization that specializes in the immune system, and was not affiliated with this study. “The molecular basis for this redistribution [of the mother’s cells] has not been well characterized, but Dr. Wilson’s work has begun to crack that code and define the molecules responsible for this cellular redistribution and passive immunity,” Campbell said. “It is important work that fundamentallyenhances our understanding of how immunity is provided to the [baby] via themilk.

Dr. Wilson’s study will certainly form the basis for many other studies aimed at uncovering how the immune system is organized, particularlyat mucosal surfaces.” To conduct their research, the team used so-called “knock-out mice” that had been genetically engineered to lack the CCR10 molecule. Whereas normal lactating mice had hundreds of thousands of antibody-producing cells intheir mammary glands, the BYU team found that the knock-out mice had more than 70 times fewer such cells. Tests verified that the absence of CCR10 wasresponsible for the deficiency. Surprisingly, the research also showed that CCR10 does not play the same crucial role in signaling antibody-producing cells to migrate to the intestine. Another molecule is their “traffic light.”

The findings will be published in the Nov. 1 issue of the Journal of Immunology. The study was supported by Wilson’s grant from the National Institutes of Health, funding which continues for another 18 months and supports his and his students’ further investigation into the cells behind transfer of immunity in breast milk.

Breastfeeding mothers converge on WEM
Jennifer Yang, Journal Staff WriterPublished: 1:21 pm
EDMONTON - This Saturday at exactly 11 a.m., 27 mothers gathered at West Edmonton Mall and slipped out their breasts to feed their babies.
The women and their 30 babies and toddlers (some mothers fed two at a time) for the Quintessence Breastfeeding Challenge 2008, a global event designed to raise public awareness of breastfeeding.
The competition has mothers feeding their babies simultaneously, either in public places or at private events. In the end, participants tally their totals to determine which city had the most babies "latched on" at 11 a.m. local time.

In Edmonton, this year's challenge was sponsored by a local group called the Breastfeeding and Lactation Information and Support Source, or BLISS.
"It's kind of hard to even make breastfeeding 'normal' in a society that sees breasts as sexual," said Karen Speed, the founder of BLISS. "Breasts are made for breastfeeding ... it's the perfect food for babies and no formula will be ever, ever made that's as good for babies."
Participating mom Lee-Ann Grenier arrived for the challenge with her two children, 22-month-old Danica and her five-year-old son Zale.
She said a woman once kicked her out of a swimming pool for breastfeeding, calling it "indecent."
"I felt really stigmatized," she said. "I didn't feel like I was feeding my baby, I felt like I was doing something slutty."
For Grenier, this is exactly the attitude she wants to dismantle by participating in the challenge. She thinks people have become overly focused on breasts as sexual objects as opposed to a healthy and natural source of food for babies.
"I feel it's really important to support breastfeeding and its visibility in our community," she said. "It's the one way that I know I'm meeting my children's needs for security as well as for food."
jyang@thejournal.canwest.com
© Edmonton Journal 2008
Posted by JQ at 8:14 PM 1 comment:

On the cover of the new W, Angelina Jolie is apparently shown breastfeeding one of the couple's newborn twins.

Jolie appears on the cover of the W's November issue in a sleeveless top, which has been opened to reveal part of her left breast and a tiny hand ostensibly belonging to one of her twins, Knox Leon and Vivienne Marcheline, who were born in July.
The black-and-white photo shows Jolie smiling, her long brown hair cascading over her shoulder. The cover headline promises exclusive "private photos" of the 33-year-old actress by her partner Brad Pitt.
Jolie last caused a stir when she wore a white nursing bra underneath her tank top on the cover of People magazine after she and Pitt welcomed daughter Shiloh, now 2 years old.
Another breast-feeding cover that got people talking was in the summer of 2006, when Babytalk magazine published a photo of a baby and part of a woman's breast in profile. The magazine conducted a poll of more than 4,000 readers; a quarter of responses were negative, finding the photo inappropriate.
La Leche League International, the world's oldest breast-feeding support organization, applauds Jolie's apparent decision to be photographed nursing.

"Breast-feeding in public reveals a whole lot less than what has been revealed on the red carpet. ... I think we do need more role models like Angelina Jolie willing to be photographed and say, 'Hey look, it can be done, it oughta be done,' " said La Leche spokeswoman Jane Crouse.
Besides Shiloh and the twins, Pitt and Jolie also are parents to three adopted children: Maddox, 7, from Cambodia; Pax, 4, from Vietnam; Zahara, 3, from Ethiopia.
Exclusive photos of the Jolie-Pitt clan have fetched millions of dollars. Last summer, People magazine and the British tabloid Hello! paid $14 million in a joint deal to publish the first shots of the family with newborn Knox and Vivienne. Jolie and Pitt allowed such access in exchange for a donation to charity.
Jolie, who won a supporting actress Academy Award for 1999's "Girl, Interrupted," has drawn Oscar buzz for Clint Eastwood's missing-child drama "Changeling," slated for release October 24.
Pitt portrays a fitness club dimwit in Joel and Ethan Coen's recent comedy "Burn After Reading," co-starring George Clooney, John Malkovich and Frances McDormand.

Copyright 2008 The Associated Press. All rights reserved.This material may not be published, broadcast, rewritten, or redistributed.

http://ibtimes.com/articles/20081009/photo-magazine-cover-shows-angelina-jolie-breastfeeding.htm
Posted by JQ at 5:27 PM No comments: 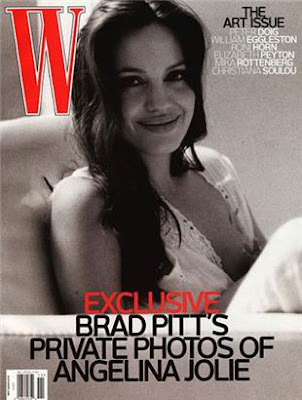