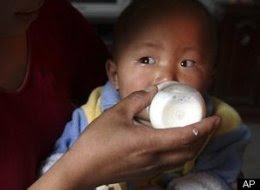 WASHINGTON — Drugmaker Abbott Laboratories said Wednesday it is recalling millions of containers of its best-selling Similac infant formula that may be contaminated with insect parts.

The voluntary action affects up to 5 million Similac-brand powder formulas sold in the U.S., Puerto Rico, Guam and some Caribbean countries. The company said the products may contain a small beetle or larvae, which could cause stomach ache and digestion problems.

The recall does not affect any liquid formulas or other Abbott-brand products.

A company spokeswoman said Abbott uncovered the insects last week in one section of a manufacturing plant in Sturgis, Michigan.

"We immediately shut down that one area and began an investigation," said Abbott's Melissa Brotz. "We're in the process of resolving it now." Abbott manufactures Similac at several U.S. sites.

Brotz said the company has been consulting with the Food and Drug Administration, which determined there was no "immediate health risk" from the contamination.

Consumers can enter the lot number on their containers online to determine if they are subject to the recall. The products should be returned to Abbott for a full refund.

"Delivering anything less than the highest quality infant formula is unacceptable to us," said Brotz. "We will do whatever is necessary to maintain the trust of parents in the coming weeks."

I couldnt find any numbers here so looked around and found this website more informative then current on you have on your blog.

Perhaps the matter that a lot of folks have a problem with once achieving an improved fitness level is basically should make contact with ones own older means as they quite simply not have the practical knowledge to be able to retain their body found in newer in addition to improved upon manner Microsoft Office 2010 Key. Your very own instructor may offer you the inner tips about how to stay being confident, in fact several years upon getting the weight loss fitness instructor office 2010. Office 2010 key

nice information.... check it out for more useful details.
What are the ingredients in milk

Admin, if not okay please remove!

Our facebook group “selfless” is spending this month spreading awareness on prostate cancer & research with a custom t-shirt design. Purchase proceeds will go to cancer.org, as listed on the shirt and shirt design.

ARE YOU AWARE THAT MODERN NATURAL HERBAL MEDICINES OF THIS GENERATION NOW PERMANENTLY CURE DRUG RESISTANT DISEASES LIKE; HSV/HERPES, CANCERS, HIV/AIDS, ERECTILE DISJUNCTION/ IMPOTENCY, DIABETES FOREVER WITHOUT A POSSIBLE COME BACK OR AFTER EFFECTS?
It wonderfully worked for me;
At first I was a bit skeptical about this Natural cure for herpes and other similar medicines. Discovering people with similar symptoms who are treated and cured by Dr Utu both on medias and in social medias on daily basis motivated me, so I contacted him for help!
At first, I was a bit curious about this possible cure, but! I don't want to be left out without giving it a trial, so I contacted him as well.
Some hours later he replied me, then he asked me some private questions, of which I honestly answered, I told him how I have lived and suffered with this disease and how much I will do anything to get rid of it. He assured me of total cure after taking his herbal medicines. It was even more easier than I expected. Also I never even imagined to get my parcels within five working days, but to my greatest surprise my parcels was brought to my doorstep by the end of the second day. I collected the parcel which I followed all the instructions as he had directed. Just as I was told "four weeks medication " my medicine finished in four weeks exactly. From week one of my medication I started noticing positive change in health. and in week two I could tell much more differences and I was so eager to even testify of life again in me.
I patiently continue medication till the last bottle which was then week four. I was the first person the next day in the clinic for lab test. Not even a particle of herpes was found in my system when I collected my result. Knowing I'm now herpes negative at this point I proceeded to inform my doctor, he doubted me, that day he gave me a month appointment to be closely monitored. It's my health so I waited more six Months and again i went for 'lab test' in a different clinical lab.
This time the result was still the same as the previous one. Also since this year I have been living my normal life and am still herpes free no symptoms and even till now no cold sore or outbreak. As a result of this herbal cure in my life and my family at large, I can boast of doctors today who through me, now uses African Traditional Roots and Herbs to TREAT AND CURE patients that are, CANCERS, HERPES, PARALYSIS, and HIV successfully today. Many are still ignorant of this I know.
Contact Dr Utu directly today on; "drutuherbalcure@gmail.com" to free yourself from emotional stress and become healthy again